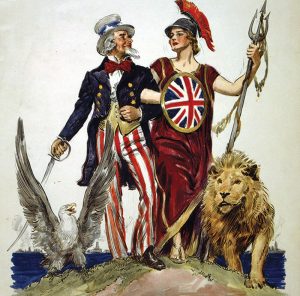 As European settlers flooded into the vast and nearly empty lands of lakes, rivers, mountains and plains, a struggle for power followed between the European nations for control of the huge natural resources of North America.

The two major rival nations were Great Britain and France. Opposing armies consisting of regular soldiers were posted from Europe, settler militias were raised from the townships and farmsteads and Native American tribes joined in, favouring one side or the other as the Europeans struggled to master the terrain and climate.

During this period, much of the conflict was along the river valleys and lakes linking the French settlements along the St Lawrence River and the British settlements at Albany and New York.  Each side built forts at strategic positions on Lake George and Lake Champlain. At the southern end lay the British forts of Lord Edward and Fort George, with the French forts of Ticonderoga and Crown Point guarding the northern end.

Throughout this period, the 27th (Inniskilling) Regiment of Foot played a significant role. 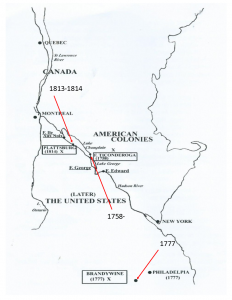 At first, the conflict went badly for the British until they had built up a strong invading army which launched a vigorous three-pronged attack in to French Canada from the south, the east and the west.   The main force, which included the 27th , was a force of some 6.000 regulars, and 9,000 militia troops whose task was to capture the French forts on Lake Champlain , and push on to seize Montreal and Quebec. 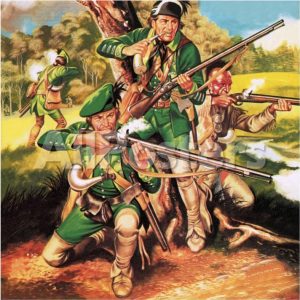 Rogers’ Rangers     An interesting and novel feature of this campaign was the creation of this force. Robert Rogers was a settler of Ulster Scot descent whose family arrived in Northern Massachusetts in early 1720s. 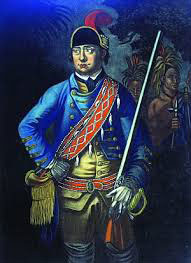 In 1756, he arrived in Portsmouth, New Hampshire, with a warrant to recruit soldiers for the British Crown. He recruited from the fort garrisons and from American and British regiments. This unit operated primarily in the Lake George and Lake Champlain area where it undertook raids against French towns and military establishments, travelling on foot, in whaleboats and on snow shoes during winter. Recruitment from the Inniskillings seems to have been popular. It was found that many of the Irishmen of the 27th were well suited to the rough lake and mountain living.  There men were two generations descended from the tough frontiersman who has defended their farms and villages during the Williamite Wars in Ireland.   Rogers’ Rangers were eventually to amount to 1,400 men and included three Native American battalions.

A great convoy of ships and gunboats conveyed General Abercrombie’s army up the Hudson River to attack the French fort on Lake Champlain. 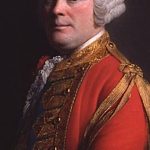 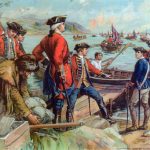 It was well placed in a well-fortified defensive out-post. It was surrounded on three sides by water and swamp stretched half way across the fourth.  A breast work, protected by a rampart of felled trees completed the defensives.   Without waiting for his artillery, Abercrombie decided on a frontal attack on the fort. For five hours, attack after attack by the British was driven off. A Scottish regiment, 42nd Foot (Black Watch), managed to fight its way to the top of the wall, but was shot down in great numbers. When retreat was ordered, discipline broke down amongst the British and the men abandoned their weapons and withdrew back to their boats.   The 27th lost over 120 men killed or wounded.

This failure led to the replacement of Abercrombie by General Amherst, who withdrew his army into winter quarters at Fort Edward. 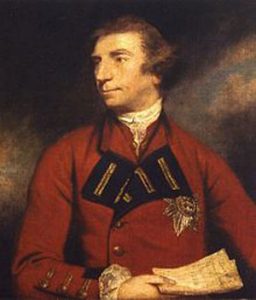 A renewed assault followed, though this time the British waited for their artillery.  After only a few days’ bombardment, the French abandoned both the fort and also Crown Point.  They fell back on a strong position at the northern end of Lake Champlain, called Ile aux Noix.

The 27th wintered at Crown Point as the British built up more strength for the campaign north towards Montreal.  At the same time, a strong force, led by General Wolfe, moved down the St Lawrence and captured Quebec in September 1759.

By now Montreal was threatened from three directions: the Hudson River, St Lawrence River and from Lake Ontario.  The three forces linked up at Montreal and the French garrison was forced to surrender in September 1760.  The British conquest of French Canada was complete.

The 27th spent the next few years in garrison duty in Canada. 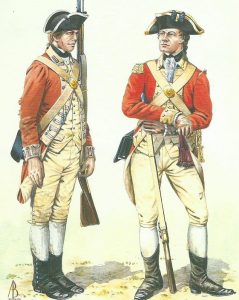 27th (Inniskilling) Private and Officer, in uniform of War of American Independence, 1777

Tension between the authorities in the 13 American colonies and the British government in London had been building for a number of years, especially after the end of the French threat to the 13 colonies. The London government felt it had the right to tax the colonies to pay for their protection, either from the French or from hostile Native Americans. By the early 1770s, the slogan, “No taxation without Representation” had become a rallying cry amongst many Americans. Minor skirmishes between soldiers and colonials escalated.  The British decision to evict American forces from positions overlooking Boston harbour led to the first large scale battle, known as Bunker Hill, in June 1775. 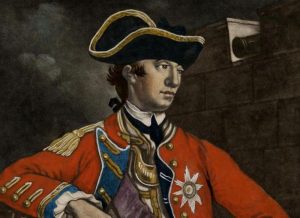 Detachments of the regiment were involved in a number of actions in the vicinity of New York throughout 1776 and 1777.  Using command of the waterways, attacks were made on concentrations of rebel forces and on their supply dumps. In one of these, the 27th were part of a force which routed American forces led by Benedict Arnold. 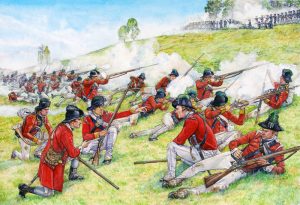 British soldiers at the Battle of Brandywine, 1777

General Howe led a British and Hessian (German mercenaries) force against Philadelphia, then the American capital, defended by General Washington. In the longest single day battle of the entire war, involving more troops than any other battle, Washington’s forces were defeated and the city evacuated. General Howe’s forces occupied the city, the band of the 27th leading the occupation army into the city.

In 1778, France entered the war as an ally of the Americans.  This changed the whole balance of power. The British decided to evacuate Philadelphia and concentrate their forces in New York. The 27th occupied Statin Island.   Following this, ten regiments, including the 27th, were sent in December 1778, to defend British possessions in the West Indies against the French.

The newly independent United States of America was sensitive to its relations with the previous imperial power. In 1812, disagreements about trade, the overwhelming use of British sea power and an undefined frontier between Canada and the United States led to open conflict.  There may also have been a desire by the new state to occupy Canada, using the opportunity of British military engagement in Europe as an opportunity to overcome weak Canadian local forces.

With the abdication of the French Emperor, Napoleon in 1814, an army of 14,000 seasoned regulars was sent to Canada to reinforce the existing forces.  Amongst these were two battalions of the 27th, the 1st and 3rd.

In August 1814, these battalions were part of a considerable force sent to attack American forces threatening Canada from Plattsburg, on the southern shores of Lake Champlain. To ensure their command of the lake, the Americans had built a small but formidable fleet which considerably out-gunned its British counterpart. Though out-numbering the Americans, the British assault on Plattsburg went badly. Relations between the British commander, Sir George Prévost, and his experienced junior commanders were not harmonious. 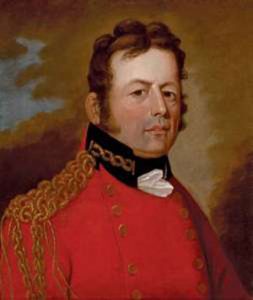 He had already fallen out with his officers when he criticised their non-regulation uniforms and the untidy appearance of the men. (in Spain, the officers were more concerned with military effectiveness than parade ground smartness).  Naval and military operations were not properly coordinated and the British ships were driven off with heavy losses. A general retreat was ordered which turned into a rout: hundreds of men deserted and the wounded and stores fell into the hands of the astounded Americans. Quite a number of the less experienced men of the 1st Inniskillings were among the deserters. 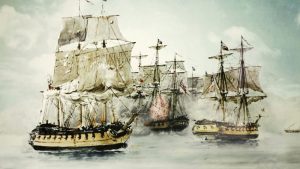 Plans were afoot to move the 27th to join the campaign in the south to Louisiana for operations around New Orleans when news arrived of Napoleon’s escape and the renewal of war in Europe. Both battalions were ordered back to the UK.  The 1st Battalion was the first to arrive, and reinforced with men from the 2nd Battalion, fought with distinction at the Battle of Waterloo in June 1815.  The 3rd Battalion arrived not long after.

The next time Inniskilling Battalions were engaged in warfare with the Americans was a hundred years later as allies during the First World War.