The Inniskilling Dragoons – A Brief History

The Inniskillings sought out and defeated the Jacobites at Crom, Sligo, Ballyshannon, Omagh and Newtownbutler. English regular army officers were sent to lead the regiments and arms and supplies were supplied. When William’s army arrived in Ireland the Inniskillings were incorporated in it and fought in the campaign throughout Ireland which defeated the armies of King James. They fought at the Boyne, the sieges of Limerick and Athlone and at Aughrim. After the war these regiments were combined into two regiments in the British army, one of foot soldiers and one of dragoons — cavalry who fought often on foot. The cavalry were armed with a musket and pistol as well as a sword. 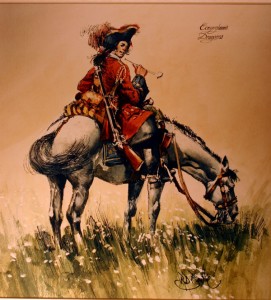 Conyngham’s Horse. Until 1751, regiments were named after their commanding officer. The regiment was King William’s guard at the battle of the Boyne in 1690. Conyngham was killed in a skirmish in 1691 near Sligo and was succeeded by Colonel Echlin. The Inniskillings were in the cavalry charge at the battle of Sheriffmuir in 1715 which ended the hopes of the first Jacobite challenge to the Hanoverian succession.

6th (Inniskilling) Dragoons. In 1751 the regiment was given a number which denoted its seniority in the Army List. This name was retained until amalgamation in 1922.

Wars against France. Three times the regiment went to war with the army to Europe against France: the War of the Austrian Succession, the Seven Years War and the French Revolutionary War. At Laffeldt in 1747 and Warburg in 1760 they were part of decisive cavalry charges which turned an allied victory into a complete rout of the enemy.

At Minden in 1759, when a massive cavalry charge was needed to complete the defeat of the French, the cavalry commander, Lord George Sackville, remained inactive in spite of orders. He was court martialed and was dismissed. The war in the Low Countries against Revolutionary France, 1793 ‚ was a catalogue of disaster and mismanagement. It spawned the rhyme ‘The Grand old Duke of York’.

The Battle of Waterloo, June 1815. This battle was fought between a French army led by the Emperor Napoleon and an allied army of British, Dutch, Belgian and German troops commanded by the Duke of Wellington.

The 6th Inniskillings were part of the Union Brigade of Heavy Cavalry along side the 1st Dragoons (Royals) and 2nd Dragoons (Scots Greys) and commanded by General Ponsonby. At a critical point in the battle, at 2.00 pm, the two brigades of Heavy cavalry (the other was the Household Brigade) were ordered to charge a massive French assault of infantry and cavalry which was bearing down on the allied line. The charge of the Heavy cavalry saved the day. The Union Brigade smashed into the French infantry and then on to the artillery. But the charge carried on too far and the Inniskillings were attacked by fresh French cavalry and suffered heavy casualties: 193 out of 400, plus 190 horses. General Ponsonby was killed.

There then followed 40 years of garrison duty in the United Kingdom. 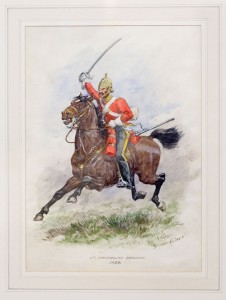 The Battle of Balaclava, October 1854. In 1854, Great Britain and her allies, France and Turkey, went to war against Russia. An army was sent to the Black Sea to destroy the Russian naval base at Sevastopol in the Crimea. The 6th Dragoons were part of the Heavy Brigade. On the way out fire broke out on one of the transport ships. The commanding officer, Lt Col Willoughby Moore, 16 men and all the horses were lost. A further 75 horses were lost in a gale and cholera ravished the men. The regiment arrived in the British base at Balaclava much diminished. On 25th October the Russians attacked the British base. The Heavy Brigade, some 700 men from five Dragoon regiments, faced a Russian cavalry force of about 2000. The Brigade, commanded by Brigadier-General Scarlett, charged uphill at the enemy. Such was the ferocity of the attack that the Russians began to falter and then to retreat. The whole action took only eight minutes. The Inniskillings lost two men killed and 14 wounded. Though ordered to follow the Light Brigade later that day in its disastrous charge, the Heavy Brigade was stopped in time when the mistake was realised. In spite of the fact that the Inniskillings saw no further action in the campaign the death toll rose to over 120 ‚ a testament to disease and hardship.

Imperial Duties. As Great Britain’s empire expanded in the 19th century the regiment had periods of service in Africa and India. These extended into the 20th century. In 1858 after the Indian Mutiny and in 1880 in South Africa, after the Zulu uprising, the regiment was involved in pacification and garrison duties.

The Anglo- Boer War 1899 -1902. This was the conflict when the mobility of cavalry made a major contribution to the outcome. Part of General French’s Cavalry Division, the regiment, fighting as mounted infantry rather than cavalry, had a number of sharp encounters with the Boers and played a full part in providing reconnaissance, outposts, escorts and dispatch riders. A young officer, Lieutenant Lawrence Oates, first made his name for bravery at this time. He was recommended for a VC for his actions. In 1912 he took part in Scott’s ill fated expedition to the South Pole. He gave his life in a vain attempt to save the lives of his companions. The regiment still celebrates his memory. 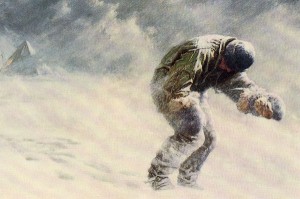 World Wars. The First World War, 1914 – 1918 saw the end of the mounted soldier on the battle field. Aircraft provided reconnaissance and armoured cars and tanks the mobility and shock tactics traditionally provided by the horse. Above all, barbed wire, the machine gun and artillery put an end to the cavalry charge. On the few occasions the Inniskillings charged with their horses and swords they suffered very heavy casualties. As a consequence they fought mainly as infantry in the trenches.

Farewell to the horse

In 1938 the regiment finally said goodbye to its horses and became a mechanised regiment. It was equipped with Mark VIB light tanks and universal carriers.

In the Second World War, 1939-1945, the regiment saw action twice in northern Europe. In 1939 it was part of the British Expeditionary Force sent to France in September 1939. It was caught up in the general confusion and retreat caused by the successful German blitzgrieg attack and was evacuated from Dunkirk in 1940. Re-equipped with Cromwell and Sherman tanks it returned to France in 1944 shortly after the Normandy landings. It fought across France, Belgium, Holland and into Germany with the 7th Armoured Division. The regiment was in Hamburg at the time of Germany’s surrender in May 1945.

Post war and further amalgamation. The regiment was sent to Korea in 1951 where it was involved in fierce fighting in the United Nations forces against the army of Communist China.

In 1955 the regiment received the Freedom of Enniskillen.

Throughout these years the regiment saw service in Egypt, Aden, Bahrain, Hong Kong, Libya and Cyprus. In 1981 it was the first Irish regiment to be deployed in Northern Ireland, in Co Fermanagh. It also served as part of BAOR, based in Paderborn in Germany. In 1991 preparations began for a posting to the Gulf, but the war against Iraq ended before this posting took effect.

0 comments on “The Inniskilling Dragoons – A Brief History”

1 Pings/Trackbacks for "The Inniskilling Dragoons – A Brief History"