As we try to shake off the Christmas excesses and prepare for 2013, it is perhaps time to reflect on our summer activities of 2012. A busy summer period involved a Field Trip, preparation and considerable research into the names recorded on the Fermanagh War Memorial in Enniskillen for a ‘Book of Honour,’ visits to Derry City Museum, including the old army barracks and fort at Ebrington, and Finner Barracks in County Donegal.

A Field trip was organised by the History and Learning Team volunteers.  This was a battlefield excursion attended by members of two local history groups, the Ballinamallard and the Newtownbutler group.  The battlefields at the centre of the trip were those which featured in the siege of Enniskillen in 1688 and 1689. 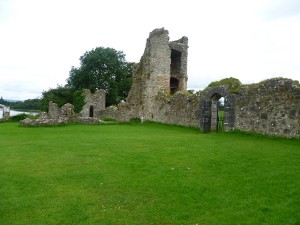 The trip began at Crom Castle, in the newly renovated West Wing.  After morning coffee the group was welcomed by Lord Erne. 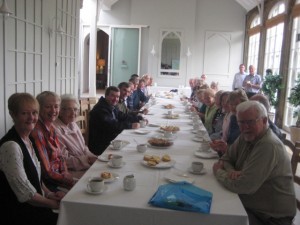 A team member gave a talk outlining the events surrounding the siege and its significance in the story of the war in Ireland at that time.  Noel Johnston, manager of the West Wing facility, followed with a talk explaining the two sieges of Crom castle. 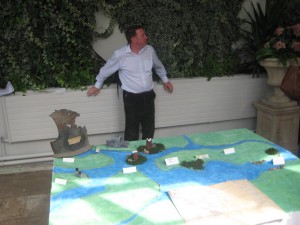 The group then moved on to the visitor centre at the National Trust part of the Crom estate.  During and after lunch the group was divided into groups to visit local folklore sites and Inisfendra Island. 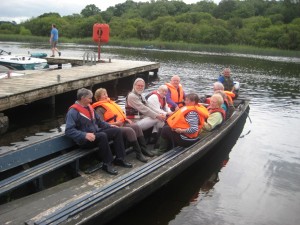 About to leave for Inishfendra

On the latter trip, which involved a short boat journey, another team member explained how he had found 17th century cannon shards and thus located the site of an artillery battery from which Crom Castle was bombarded. 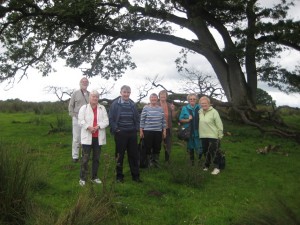 On the site of the artilley battery

The final part of the afternoon was a short drive to the site of the last big battle of the period, at Newtownbutler. 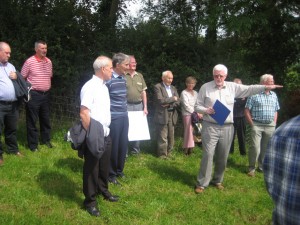 A short overview of the battle, describing the course of the battle, explaining the topography of the area and the battle’s aftermath was given.  Members showed particular interest in a replica matchlock musket, such as would have been used at the time.

The Fermanagh War Memorial in Belmore Street, Enniskillen records the names of 581 men and one woman  from County Fermanagh who died in the First World War 1914-1918. 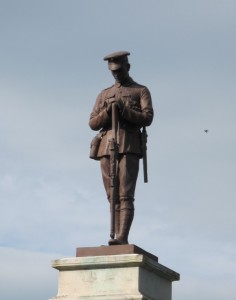 Now all roads lead to France
And heavy is the tread of the living,
but the dead returning lightly dance.

To mark the 100th anniversary, in 2014, of the outbreak of that war a Book of Honour will be launched.

This book will contain the results of research into the lives and deaths of the people whose names are recorded on the Memorial.

If an ancestor of yours, from Co Fermanagh, whose name is on the War Memorial, died in the First World War and you have any record or photograph that you would like to be included in the book, the team will be most pleased to hear from you.

Already a huge amount of information has been unearthed, but we feel sure much remains hidden. This is an opportunity to have the life and death of a member of your family further honoured and remembered.

We are also interested in making a record of the names of men who died in the war, but whose names do not appear on the Memorial. It is clear from newspaper records that this is the case. 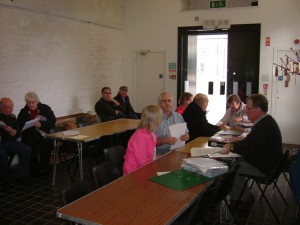 Also, you can go to www.ulsterwarmemorials.net and click on County Fermanagh where you will find a list of the names on the Memorial.

Life, to be sure, is nothing much to lose;
But young men think it is, and we were young

The Museum volunteers on the History and Learning Team went on a trip to Londonderry to see an exhibition in the Tower Museum by the team from Derry City Museum. This exhibition was their part of the programme called ‘Connection and Division’ which involved cooperation between the Derry Museum, Fermanagh County Museum and the Inniskillings Museum to examine the impact of the period 1910 – 1930 on our respective areas.  The team was met by the Derry City museum curators who introduced the exhibition. 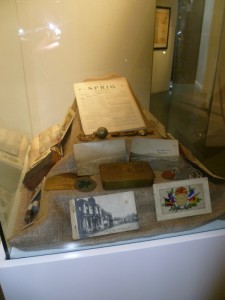 Inniskillings artefacts in the exhibition

After lunch the team crossed the river Foyle using the new pedestrian ‘Peace Bridge’. Some members of the team had not seen the bridge before and were most impressed with its impact and design. 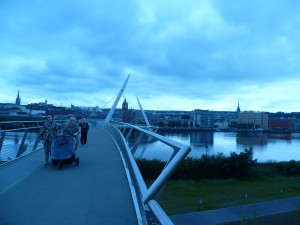 The bridge led into the old army barracks and fort at Ebrington.  This is now in the process of being developed as a community facility but at the same time preserving the fine buildings, with the parade ground being the centre of the conversion. 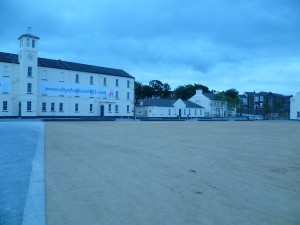 Among other attractions there will be a Maritime Museum located on the site. Team members who had not been there before were delighted to see such impressive buildings and open space being developed in this way.

In September a group of Museum volunteers joined with the Irish Regiments Historical Society in a visit to 28th Infantry Battalion of the Irish Defence Force who are stationed in Finner Camp. 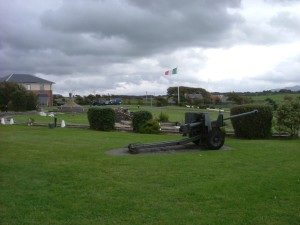 On arrival we had coffee in the officers’ mess before being addressed by the Commanding Officer of 28th Battalion, Lt Col Sean Gavin.  He gave an informative and amusing account of his career in many foreign spots working for the United Nations. Then Colonel Declan O’Carroll (retired) spoke about the history of Finner as a British Army base. We then visited the oldest remaining building at Finner, dating back to British times; it is now a military chapel. 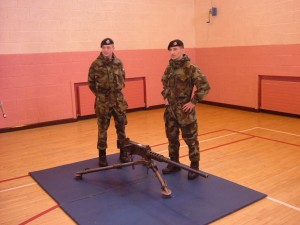 After lunch we were able to inspect some of the equipment used by the modern Irish Army. 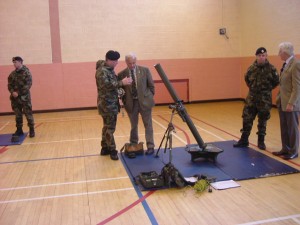 A display of small arms was put on in the Gymnasium and we then walked to a rise overlooking the bay of the river Erne and the firing ranges where Armoured Personnel Carriers were also on display. 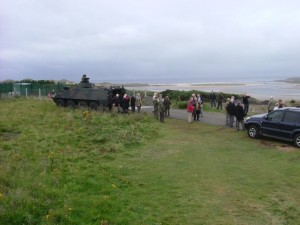 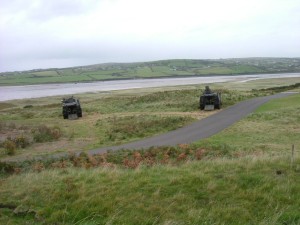 28th Battalion is currently in training for deployment with the UN in Lebanon.