Somme Bugle to sound the ‘Advance’ 100 years on

On 1st July 1916, Drummer Jack Downs of the 10th Battalion, Royal Inniskilling Fusiliers, sounded the ‘Advance’ of the 36th (Ulster) Division at the Battle of the Somme. Over the first two days of the battle, the Division lost some 5,000 men and, of these, more than 2,000 had been killed. The Royal Inniskilling Fusiliers lost 2,208 casualties, of whom 868 were killed.

In the history of the First World War, few bugles could have more resonance than that belonging to Drummer Downs, and to mark the centenary of the Battle of the Somme, this iconic Bugle, held in the collection of the Inniskillings Museum, will again sound the ‘Advance’ exactly 100 years on.

The Somme commemoration at Enniskillen Castle on the morning of Friday 1st July will start promptly at 7.00am with gates open to the public at 6.30am (admission free). This symbolic service will be held outdoors against the backdrop of the historic castle, birthplace of the Inniskilling Regiments. The service will conclude at 7.45am when everyone present will have the unique opportunity to sign The Inniskilling Scroll of Honour which lists the names of all Royal Inniskilling Fusiliers killed on the first two days of the battle. The Scroll will then be placed in a First World War brass shell case and kept in the museum collection as part of the Inniskillings Museum Great War legacy for future generations. 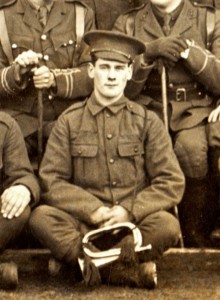 The commemorations on the 1st July will conclude with an ecumenical Service of Reflection in St Macartin’s Cathedral, Enniskillen at 7.30pm, where a new memorial window will be dedicated in the Regimental Chapel to all those Inniskillings who served in the Great War and their families.