Three Cheers for the Derrys! 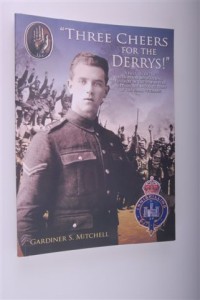 The story of the 10th Battalion Royal Inniskilling Fusiliers in the First World War.

A lavishly illustrated 219 page book, it tells the story mainly through the recollections of the final veterans.  It is about a tightly knit group of young men, who before the war went to the same schools, played in the same streets, visited each others homes and knew each other’s families. Brothers, fathers and sons and many friends enlisted together.

Throughout the war they saw the men of their community, many of whom had never left Ireland before, slaughtered and maimed in a war which had little or nothing to do with them.