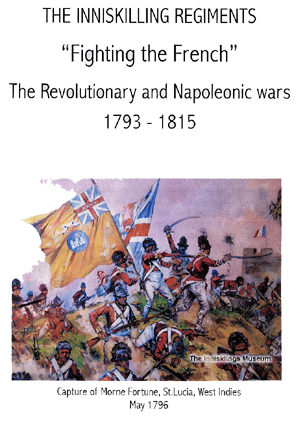 This ten page booklet describes the many theatres of war the regiments were committed to during this period.

While the Dragoons served only in Northern Europe, the 27th Inniskillings  fought in the West Indies, Egypt, Italy, Portugal, Spain and Northern Europe.

The story of the 27th covers notable events in the regiment’s history like the capture of St Lucia, the battle of the Pyramids, the Battle of Maida, the campaign with Wellington in Spain and the final contribution to the defeat of Napoleon at Waterloo in 1815.