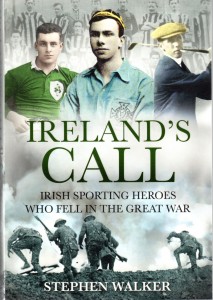 In Ireland’s Call BBC journalist Stephen Walker charts the fascinating stories of 40 Irishmen who swapped the sports field for the battlefield – household names who gave up their blossoming careers to volunteer for the Great War. Using rare archive letters, memoirs and newspaper reports, this compelling book features the stories of sportsmen whose lives were tragically cut short in the mud of the Somme, the despair of Ypres and the heat of Gallipoli. It chronicles the remarkable achievements of Irish international footballers and rugby players, athletes, GAA stars, cricketers, hockey players and a record-breaking Irish champion golfer. A century on, their sacrifices and those of a generation of Irish sporting heroes, are finally and faithfully recorded in this unique and evocative account.