Four Memorials to a Young Soldier 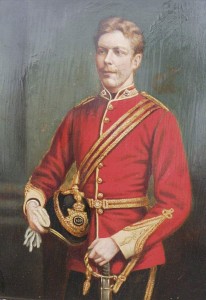 There are three memorials to Richard Smith in St Macartin’s Cathedral, Enniskillen and one in St Mary’s Church in Shrewsbury.

His grave stone is in the Cathedral grounds, just to the left of the entrance porch, and a brass tablet and stained glass window are in the Regimental Chapel in the Cathedral. 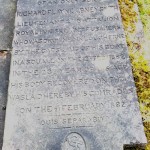 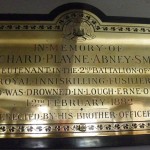 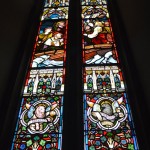 Richard was the only son of Major Richard Playne Smith of the 10th Hussars.

He was commissioned into the Shropshire Militia in 1879 before joining the 108th Regiment of Foot.  This regiment became the 2nd Battalion, Royal Inniskilling Fusiliers in 1881, and he was posted to Enniskillen.

There he bought a yacht, and while out sailing on Lough Erne with John Smith, a well-known local waterman on Sunday, 12th February 1882, the yacht was caught in a storm and sank.  Both men were drowned. Their bodies were recovered a week later. 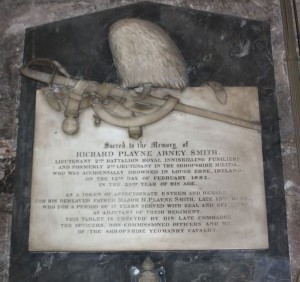 Lieutenant Smith, aged 22, was buried with full military honours.  The procession from the main barracks, through streets lined with spectators, was led by a firing party of 40 Inniskilling Fusiliers, followed by the Regimental band playing with muffled drums. At the head of the band was the regimental mascot, Fan, a doe antelope adopted in India in 1875. The coffin, carried by six men of Smith’s company, was draped with the Union and the Regimental flags and was surmounted by his helmet and sword along with five wreaths.  Following was the chief mourner, his father Major Smith, and regimental officers. The main body of the regiment, some 400, followed.

At the church, the coffin was received by the garrison chaplain, Rev D O’Leary and the rector, Rev S Greer.  After the service, in the grave yard as the coffin was lowered into the grave, three volleys were fired.

The funeral of John Smith took place on the same day, in the Roman Catholic cemetery. As the funeral passed through the town, men of the regiment presented arms.