Once again the Inniskillings Museum participated in the Erne Vintage Car Rally. This year it took place on Friday 17 August at 7.30pm. The weather, although good during the day, became very overcast and wet about an hour before the parade began. However, the organisers must have friends in high places because as the parade assembled the sun shone and remained shining for the duration of the parade. 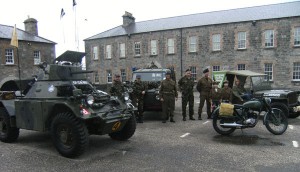 This year we had our BSA 350cc Motorbike on parade courtesy of some very hard work by Gordie Johnson. It probably looks as good now as it did when it came off the production line! John Sproule was astride the machine and we are sure that he noticed the subtle differences between the BSA and his own BMW Motorbike. 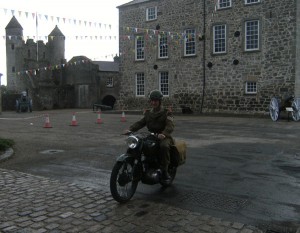 John on the 350cc BSA Motorbike – promoted to Sergeant for the day!

We also had our trusty Ferret Scout Car on parade with Bill Montgomery at the wheel. Bill is Chairman of the Ulster Military Vehicle Club (www.umvc.org.uk/) and has his own Austin Champ which he has restored. The Ferret proved to be a bit temperamental to begin with and we were a little worried that it might let us down during the rally; however, our fears were unfounded. 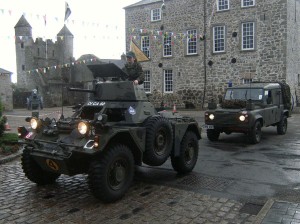 Dave Shakespeare and Tina brought along a LWB Landrover in Military Police livery – including a blue light! Tina offered to command the Ferret due to a lack of people available, a somewhat dubious choice given the weather conditions when she volunteered!! 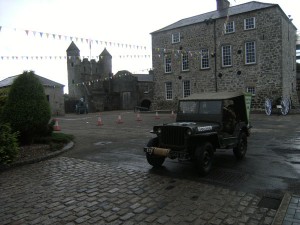 Gordie and Family in the Wilys Jeep

Our ‘convoy’ was organised by Gordie Johnson who drove the Wilys Jeep with his family on board suitably attired in period Inniskillings uniforms! Our thanks to Gordie for organising the display and all those who took part. 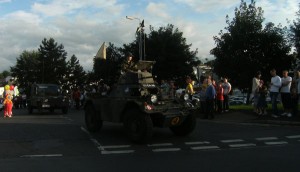 Ferret and Landrover in town – note the blue skies!

Another successful outing; we have a year to contemplate on how we can improve our display next year. 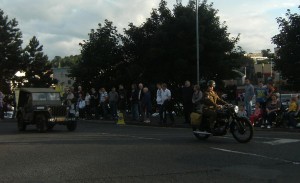 John leading the convoy and looking the part!