In 1898 after Ieaving Eton, Oates joined the 3rd West Yorkshire (Militia) Regiment, and two years later joined the army, being posted to the 6th (Inniskilling) Dragoons. 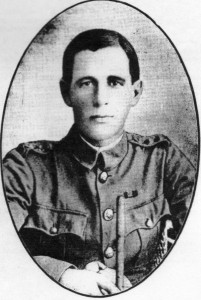 Oates in uniform – This photograph is taken from the editorial of ‘The Inniskilliner’, the journal of the 6th (Inniskilling) Dragoons, in February 1913, which was the first that the Regiment heard of the fate of the party that went to the Pole

In 1901 he went on active service in the South African War. He served with distinction, and was mentioned in dispatches for gallantry in the field. He was severely wounded in March 1901, and was invalided home for a short period, but returned to the front before the end of the year.

In 1902 he was promoted Lieutenant and successively served with his regiment in Ireland, Egypt, and India; he was promoted to Captain in 1906. In 1910, Oates applied for a post on the Antarctic Expedition under Captain Robert Falcon Scott RN. 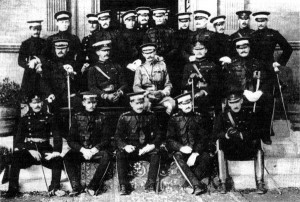 The Inniskilling Officers in Ireland 1904. The Regiment was stationed at the Curragh from November 1902 to April 1904 and then for two years at Marlboruogh Barracks, Dublin. Oates is fifth from the left in the back row, Baden-Powell is second from the right in the middle row

He was accepted and, with his knowledge of horses, was put in charge of nineteen ponies, which were to be used for sledge haulage.

The expedition sailed in June 1910 on the Terra Nova and, Ieaving New Zealand in November, reached the Ross Sea and established a base at Cape Evans on Ross Island in January 1911.

In November 1911, Oates formed part of the sledging party under Scott, which set out for the South Pole.

After an arduous journey the South Pole was reached on the 18th January 1912, thirty-four days after Roald Amundsen had planted the Norwegian flag there.

The return journey was begun the same day, temperatures were extremely low and weather conditions were adverse. Oates showed signs of feeling the cold severely, but the party made good progress to the Beardmore Glacier.

On the 17th February, Petty Officer Evans was the first to succumb to the cold, and died. The four remaining men in the party continued to the next depot, but travelling conditions worsened and temperatures fell to below minus forty-seven degrees.

Survival depended on the ability of the men to reach each depot before their food and fuel supplies were exhausted.

Oates was suffering from frost bitten feet, but he continued for as long as he was able.

As travelling conditions worsened, Oates realised he could go no further and asked to be left behind as he feared he would hold up the progress of the rest of the party, lessening their chance of survival. His request was refused, and for another day he struggled on. On the morning of March 17th (Oates’ 32nd birthday), during a blizzard, Oates told Scott he was ‘just going outside and may be some time’.

He was never seen again. 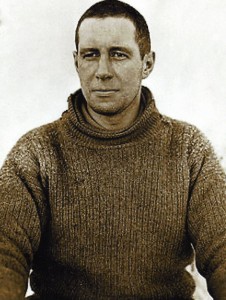 Scott wrote in his diary on 18 March: ‘Should this be found I want these facts recorded:

Oates’ last thoughts were of his Mother, but immediately before he took pride in thinking that his regiment would be pleased with the bold way in which he met his death. We can testify to his bravery. He has borne suffering for weeks without complaint, and to the very last was able and willing to discuss outside subjects. He did not – would not – give up hope to the very end. He was a brave soul. This was the end. He slept through the night before last, hoping not to wake; but he woke in the morning – yesterday. It was blowing a blizzard. He said, ‘I am just going outside and may be some time’. He went out into the blizzard and we have not seen him since.’

The self-sacrifice of Oates enabled the three men to push on and there was a possibility that, in spite of their extreme exhaustion, they might cover the thirty miles to the food supplies at One Ton depot. However, a heavy blizzard held them up eleven miles from the depot and, unable to proceed, the three men perished on the 29th March 1912.

A search party found the bodies of Scott, Wilson and Bowers on the 12th November 1912 but never found that of Lawrence Oates.

Near the site of his death they erected a cairn and cross bearing the inscription, ‘Hereabouts died a very gallant gentleman, Captain L. E. G. Oates, of the Inniskilling Dragoons. In March 1912, returning from the Pole, he walked willingly to his death in a blizzard to try and save his comrades beset by hardships.’

Oates Land, part of the Antarctic coastline discovered by the Terra Nova in February 1911, was named in Oates’ honour.