It is with great sadness that we report the death of Bill Vincent, a former officer in the Royal Inniskilling Fusiliers. He died on 18 October 2012 in Monaco. 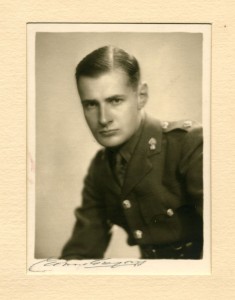 The son of an Irish father, Arthur Rose Vincent, a graduate of Trinity College in Dublin, Ireland, and an American mother, Maud Bourn of San Francisco, Mr Vincent’s boyhood home was Muckross House on the Lakes of Killarney. However because his parents were called every two years or so to California by his grandparents Mr and Mrs William Bowers Bourn, he also became very familiar with their home Filoli and the Empire Mine in Grass Valley, California, as well as his mother’s house in Pebble Beach, “Asilo de L’Estrella”.

His father and grandfather gave Muckross to the people of Ireland in 1933. This is now known as the Bourn Vincent Memorial Park. The estate gardens are known internationally, and the lakes and woodland are a botanical Mecca for students and tourists.  This is now incorporated into the Killarney National Park.

From 1933 to 1936 he was educated at Bryanston School in England.  Before World War II, he spent one year at the University of Munich and then went to Magdalene College, Cambridge, from where he obtained both BA and MA degrees. 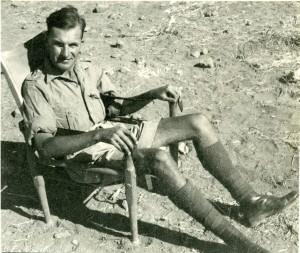 Mr Vincent left Cambridge University at the start of World War II, enlisted as a Guardsman in the Irish Guards, and later was commissioned in the Royal Inniskilling Fusiliers.  He served in India, Persia and Iraq, the Middle East and Italy and was wounded twice in that theatre.

Early in 1947 he returned to California and, at the end of 1947, he joined Hiller Aircraft Corporation (then United Helicopters).  He soon became a Director and, in 1949, was appointed Vice-President in charge of Sales.  In that capacity he was responsible for pioneering the sale and use of helicopters in many countries, including Egypt, Pakistan, India, Thailand, Indonesia, Vietnam, as well as many European and Latin American countries. 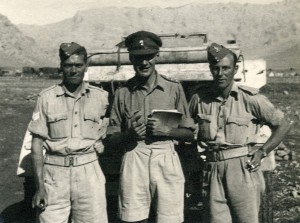 After leaving Hiller Aircraft Corporation in 1962, Mr Vincent became an investor in oil exploration and was a partner of Carver-Dodge Oil Company in Denver, Colorado, who had very successful discoveries of oil first in Indonesia and later in Alberta, Canada.

In 1983 he was appointed Chairman of the Board of Inishtech Capital Fund Limited, an Irish Venture Capital Company formed in the Cayman Islands, to invest in the United States of America.  After a successful merger of the company he relinquished the Chairmanship in January 1989.

In 1990 he was appointed a Director of Independent Newspapers, which owns the IRISH INDEPENDENT and The Independent published in London, and many other newspapers in Ireland, Great Britain, Australia, New Zealand and South Africa.  They also own a number of radio and cable stations in Australia, New Zealand and Ireland.  In 1999, on attaining 80 years of age, he resigned from the Board of Directors. 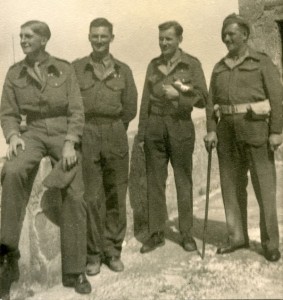 In 1983, Trinity College, Dublin, Ireland conferred upon him a degree of Doctor of Laws (LL.D.) Honoris Causa.

In November 2004 he was made a Commander of the Order of Saint Charles by the Prince of Monaco.

In July 2005, the University of Ulster conferred upon him a degree of Doctor of Laws (LL.D.) Honoris Causa.

Mr Vincent is a member of the Pacific Union Club, San Francisco; the Burlingame Country Club; The American Society of the Most Venerable Order of the Hospital of St. John of Jerusalem; The Society of California Pioneers; White’s Club, London; The Travellers, Paris; The Kildare Street and University Club, Dublin; Yacht Club de Monaco and is a life member of the Killarney Golf and Fishing Club, County Kerry, Ireland. 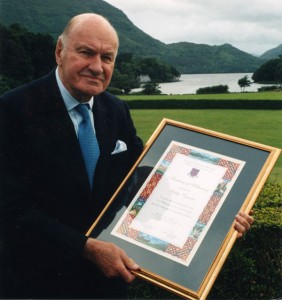 Mr Vincent is survived by his wife, Elisabeth Vincent, whom he married in 1952.  He leaves one stepson, Marc Banet-Rivet, whom he adopted many years ago, and three grandsons, Matthieu, Antoine and Adrien Banet-Rivet.  He is also survived by his niece, Miss Fleur Melvill-Gardner and two great-nephews, Alexander Gregory Leith, the present Lord Burgh and his brother the Hon. Patrick Leith and his two great-nieces the Hon. Rebecca Leith and the Hon. Nadja Leith.