WW1: Festubert – Never To Be Forgotten

In the Spring 1930 edition of The Sprig of Shillelagh, covering the period of April, May, and June, the unveiling of the “Le Touret Memorial”, at the Military Cemetery in Richebourg, was reported. According to the article, there were 13,479 names on the memorial. Today a total of 245 Royal Inniskilling Fusiliers are listed by the Commonwealth War Graves Commission as appearing at Le Touret. The majority of these men were lost on one night – the night of the 15th/16th May 1915 at the Battle of Festubert. The “Sprig” article reads “the Never to be Forgotten 15th of May, 1915, when, at Festubert the 2nd Battalion The Royal Inniskillings Fusiliers, had 700 casualties out of a strength of 1,000, and covered itself with glory”.  Now, 100 years on, it is a battle we hear little about despite it being the single worst day for losses for any Battalion of the Royal Inniskilling Fusiliers throughout the entirety of the First World War.

The 2nd Battalion, having been part of the British Expeditionary Force, was stationed in Dover at the outbreak of the First World War. After receiving drafts of some 700 men from the reserve battalions based in Ireland, they embarked for service on 23rd August 1914. The Battalion War Diary starts two days later, on 25th August, reporting the men detraining at Bertry at 4:30pm and by 7:45pm they were engaged in battle. And so began the First World War for the Inniskillings.

By the end of April 1915 the battalion had suffered 292 men killed and hundreds more wounded and missing. Drafts were coming in from the Reserve battalions “back home”, but it was a constant struggle to keep numbers up. In early May they were in and around the small village of Richebourg, taking part in various attacks on the German lines that CAM Alexander said could “only be classed … as a failure”. On 10th May they went into billets at Richebourg. It was at this time that some of the most well-known photographs of the 2nd Battalion were captured. Men seen in these photos such as 2/Lt JJL Morgan, Lt J H Stewart, Lt RWG Hinds and Lt E Crawford were all amongst the 392 men killed in the month of May 1915. 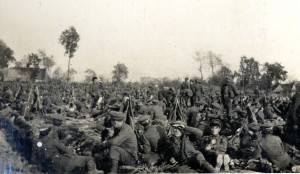 After daylight attacks had failed on 9th May, a night attack was deemed to be the best option for a successful break through the German lines. The offensive of the 1st Army was to be resumed on the night of the 15th/16th May. The 2nd Battalion had taken over the front line breastworks on the night of the 12th, and before the offensive commenced had already lost 6 men with forty more wounded. Amongst these was 2/Lt VES Mattocks.

At 11:30pm on the night of the 15th May, the 2nd Battalion attacked to the right of the 2nd Worcestshire Regiment, supported by the 2nd Oxford & Bucks and the 9th Highland Light Infantry. “A” and “D” Companies attacked to the left and right, respectively, of a cinder track bordered by two deep ditches on either side. Both gained significant ground. “D” Company penetrated the 1st and 2nd Lines of the German trenches, but “A” Company were cut off after having taken the 1st Line Trench due to lack of support from the failed attack to their left flank and severe losses. “B” Company, who were in support of “A” Company, also suffered grevious losses and were unable to provide the much needed assistance in order to ensure success. 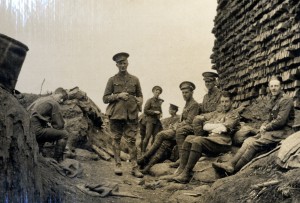 In trenches at Cuinchy; Crawford, Hinds, Cox, Daniels and Lyons

“D” Company would hold the Second German Line until the night of the 16th when they were ordered to retreat to the Reserve Breastworks. The following night they were relieved by the 1/1st Gurkhas.

In total 252 Officers and Men of the Royal Inniskilling Fusiliers are recognised as having lost their lives on the 15th and 16th May 1915. In the following months, reports of the battle appeared in the Sprig of Shillelagh, such as one from Sergeant R Langford who said, harrowingly, “Many of our wounded were buried by shells in dug-outs where they had been placed for safety”. In other issues, wives searched for their husbands, and others supplied photographs where their husbands were known to have died for obituaries. 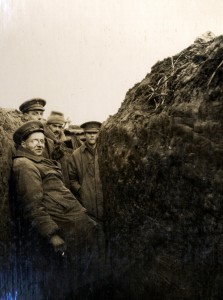 The men who peer out at us from these photographs knew not what they were to face just days later. Their faces bear testimony to the courage demonstrated by both the Inniskilling Regiments throughout the First World War, and remind us of the youth that was lost.