1688-1690.   Originally the Inniskillingers were volunteer soldiers and would have worn their everyday clothes. Grey cloth was supplied from England, and red coats were worn in battle.   The uniform worn by regular soldiers in the army was closely modelled on a man’s everyday clothes: wide brimmed hat, long coat, breeches and shoes.  In the illustration he is wearing a bandoleer of wooden containers with measured charges of gunpowder.   The red coat became normal military wear. 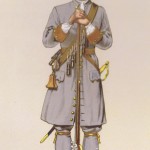 Inniskillinger in the grey uniform of the volunteer regiments – 1688 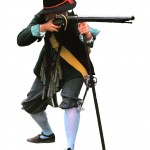 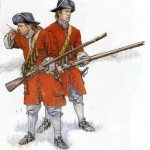 By 1700 soldiers wore red full skirted red coats with coloured facings, cuffs and red breeches. By 1740 the uniform is even more elaborate, with the coat’s skirts buttoned back and worn over a buff waistcoat. The soldier wore red breeches, protected by high white gaiters called spatter-dashes.   By about 1760, these had been replaced by more serviceable black ones, which were gradually reduced in length.  The normal head gear was a tricorn hat.  Grenadiers wore a high cap made of fur or embroidered cloth, so designed to facilitate the throwing of grenades. 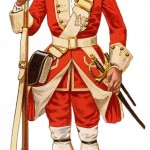 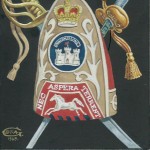 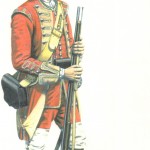 In 1775 the colour of breeches changed to buff. 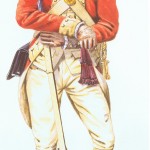 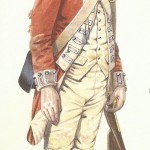 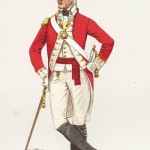 In 1800 the headgear was replaced by a stove-pipe shaped helmet made of boiled leather or felt called a Shako.  The most famous was the Belgic Shako, introduced in 1812, worn by British soldiers at the battle of Waterloo. 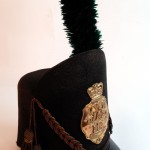 By this time the men were wearing white or grey trousers which reached to the shoes and were protected by short spats.  The jacket had further shortened to a scarlet coatee, with turn back tails. 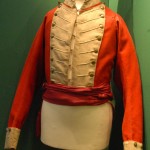 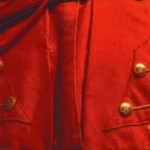 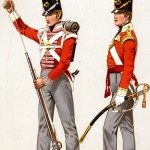 In 1816 the Belgic Shako was replaced by the bell shaped Shako, which went through a variety of quite extravagant shapes till 1844. The soldier in South Africa is wearing his forage cap because the Bell Shako was too hot. 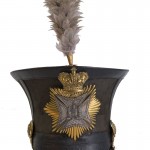 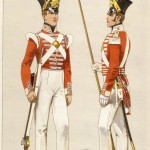 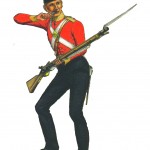 In 1844 the Shako was redesigned by Queen Victoria’s husband, Prince Albert, and the stove-pipe shape returned.  Gradual redesigns reduced the height until the design featured was adopted, which remained the basic shape until the Shako was abandoned in 1878. 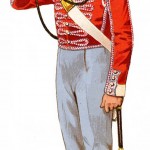 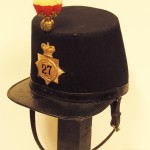 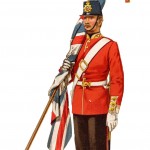 In 1880 head dress became a cork helmet, based on a German design, with a tropical version of lighter construction. 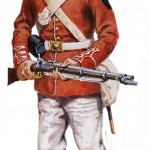 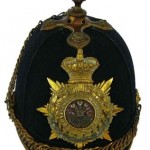 After 1881, for ceremonial purposes, officers wore bearskin caps, and other ranks a smaller ‘sealskin’ cap (made of raccoon skin). 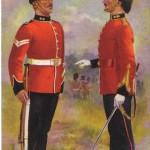 The uniform was gradually becoming simpler in design.   The red coat remained normal fighting wear until the 1880s, to be replaced by khaki, a necessary development as rifles became more accurate and with longer range. The first time the Inniskillings wore khaki in battle was the Tirah campaign in NW India in 1897.  In the illustration the soldier is wearing a padded neck curtain attached to his helmet to protect against the sun. 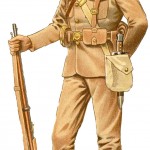 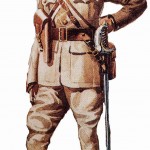 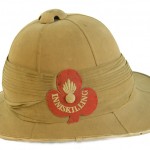 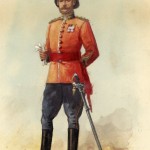